About a year or so ago I happened upon this thing called “Book Bub”. This is an e-mail subscription where I get notified daily of e-books on sale for very low cost and in some case at no charge. It’s pretty damn awesome, if you ask me. The biggest drawback: I keep ordering these free books because they look interesting!

Now, because of this, I have a plethora of options to read digitally that I never get around to reading. Well, last week, I was caught at work without a book to reed during my breaks and lunch. As a result, I opened my Kindle to see what magic I had downloaded previously due to Book Bub. I found “The Armored Saint” by Myke Cole. This book, dear reader, is why you read. This book: amazing. A quote:

“It is a person you love. Not a name. Not a she or a he. A person in all their shining glory. There is a thing in us, Heloise. A seed. It makes us who we are. It is our core. That is the think that we love. It alone exists. It alone is holy. It has a home, no name. It is neither male nor female. It is greater than that.”

As always, possible spoilers ahead, though I try to avoid major revelations. 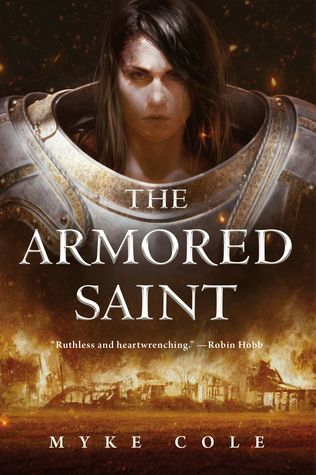 “The Armored Saint” takes place in a fantasy world filled with magic and technology – though the technology isn’t quite what you expect. The protagonist is a young woman named Heloise Factor. Apprentice to her father, Heloise has a very interesting few days (the entire book covers a three day span) as she matures from a girl almost grown to hero of a small village, along with the trials and tribulations that comes with being a teenager.

One of my biggest frustrations with fantasy novels is the introduction of new names, titles, and words. As a result, my first impressions of many books leave something to be desired. Before I get into the meat of the storytelling, I wanted to share with you that “The Armored Saint” lacks this particular issue. The names, while not “standard”, are also not completely unfamiliar. I can remember the characters names and not confuse them, but the names are just different enough that I have no issue accepting the world. And to me, that is an important factor.

If characters are given names that are too much like the real world one loses the fantastic element. Yet, Mr. Cole’s choices of name and title (Heloise instead of Helen; Samson instead of Samuel; Maior instead of Mayor) are just different enough to remind us that we are in a new world, but similar enough not to pull us out of the moment.

How does one introduce realism into a fantasy world with unique technology? Easy – as the author you don’t make the magic or the technology the focus of the book. Instead, you make the story about the people and let the magic and technology flow naturally from them.

Question: What value is there is knowing that magic has caused a catastrophe in the past and the world fights to prevent that again if you don’t care about the characters? Answer: help the reader care.

Mr. Cole brilliantly identifies what makes a person, a person. A teenager in love and scared to express that love is something we all have experienced. Set against a world where children might be persecuted as wizards just colors it a little different than what we experienced, but that just makes this strange shoe feel comfortable and foreign at the same time.

I have only one complaint, and it is very minor. I wish the technology would have been explained more early on in the book. I felt a little lost in understanding how it worked in the middle of battle – which sadly made the fighting seem a bit hard to follow. This relatively minor, however. As you all know, I am a self-professed “theater kid”, so the character is what I really dive into when reading a book. I would be remiss if I didn’t mention this for some of you who have a different appreciation than I do.

Buy the damn book. Why are you still reading this review?